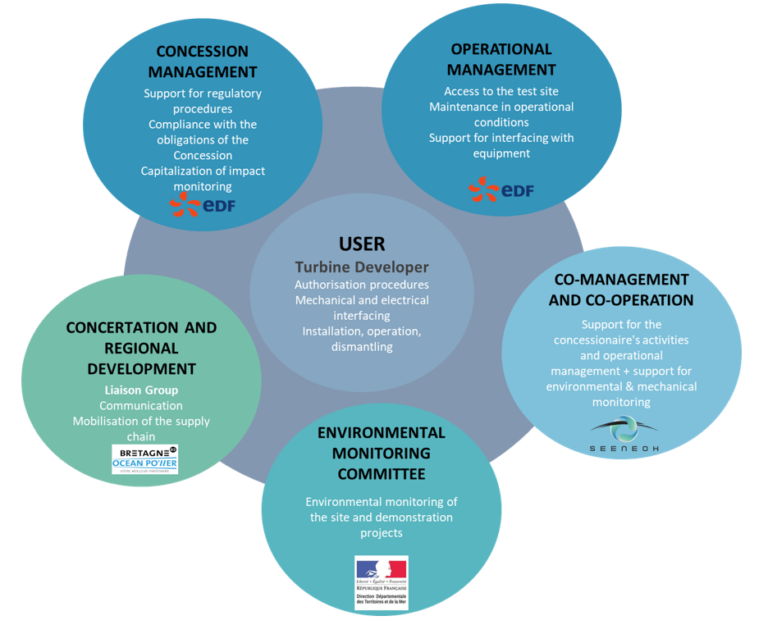 EDF is a French energy company whose objective is to build a CO2-neutral energy future, reconciling the preservation of the planet, well-being and development, thanks to electricity and innovative solutions and services. Since 1966, EDF has been working to harness marine energy, for example through its tidal power plant at La Rance in Brittany and the Paimpol-Bréhat tidal turbine test site, which it has been operating since 2008.

SEENEOH is an operational team managing a scale tidal test site in the Gironde Estuary (Bordeaux, 33). SEENEOH has transferred its expertise to the open sea tidal test site of Paimpol providing its support to EDF in all its range of expertise.

Prompted by the Bretagne Regional Council, all the MRE stakeholders in Brittany have joined forces as a single entity to foster more efficient industrial projects. Bretagne Ocean Power seeks to:

With 2,730 km of coastline, the largest coastline in France, powerful currents, regular winds and the largest tides in Europe, Brittany has an exceptional potential for testing, experimenting and exploiting the various sources of marine energy. In order to reduce the region’s energy dependence, fight against global warming and promote the development of a strong industrial sector in Brittany with international influence, the Brittany Region is implementing a very proactive policy in favour of the development of marine energy.